Among the millions of Canadians currently taking prescription medications, more than 50% are non-compliant in some manner, most often because they take their medications less frequently than prescribed.
​The CDC (Centers For Disease Control & Prevention) Wrote:

"Adherence to prescribed medications is associated with improved clinical outcomes for chronic disease management and reduced mortality from chronic conditions (1). Conversely, nonadherence is associated with higher rates of hospital admissions, suboptimal health outcomes, increased morbidity and mortality, and increased health care costs (2). In the United States, 3.8 billion prescriptions are written annually (3). Approximately one in five new prescriptions are never filled, and among those filled, approximately 50% are taken incorrectly, particularly with regard to timing, dosage, frequency, and duration (4). Whereas rates of nonadherence across the United States have remained relatively stable, direct health care costs associated with nonadherence have grown to approximately $100–$300 billion of U.S. health care dollars spent annually (5,6). Improving medication adherence is a public health priority and could reduce the economic and health burdens of many diseases and chronic conditions (7)."

References:
Almost half of all Americans, approximately 133 million people, live with at least one chronic disease. 1 Because ongoing use of prescription medication is a key component of treatment for chronic conditions, medication adherence—or making sure that patients take the drugs prescribed for them—is a matter of great importance to policy makers, insurance plan sponsors, physicians, and patients.
Patients who adhere to their medication regimens enjoy better health outcomes 2,3 and make less use of urgent care and inpatient hospital services, compared to patients with similar medical conditions who are not adherent. 4,5 Yet despite the evidence of improved outcomes from adherence, the World Health Organization reports average medication compliance rates in developed countries of just 50 percent. 6

Prescription Medications Among Seniors — A survey in the United States of a representative sampling of 2206 community-dwelling adults (aged 62 through 85 years) was conducted by in-home interviews and use of medication logs between 2010 and 2011. At least one prescription medication was used by 87 percent of the residents. Five or more prescription medications were used by 36 percent, and 38 percent used over-the-counter medications. 55% of seniors don’t take their medication according to their Doctor’s orders.
In a sample of Medicare beneficiaries discharged from an acute hospitalization to a skilled nursing facility, patients were prescribed an average of 14 medications.
The reality is that the vast majority of the top 10 causes of death in the U.S. are related to chronic health issues that are heavily influenced by the decisions (or lack thereof) that individuals make over the course of their lives. 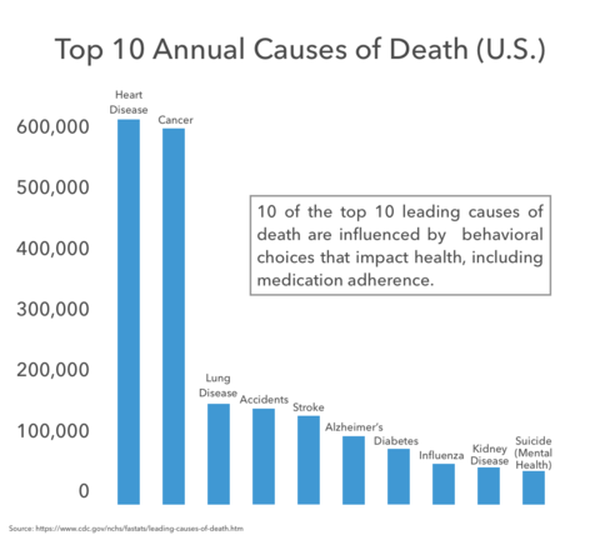 Polypharmacy — Polypharmacy is defined simply as the use of multiple medications by a patient. The precise minimum number of medications used to define "polypharmacy" is variable, but generally ranges from 5 to 10.
The issue of polypharmacy is of particular concern in older people who, compared with younger individuals, tend to have more disease conditions for which therapies are prescribed. It has been estimated that 20 percent of Medicare beneficiaries have five or more chronic conditions and 50 percent receive five or more medications. Among ambulatory older adults with cancer, 84 percent were receiving five or more and 43 percent were receiving 10 or more medications.

​☆ PLEASE NOTE: These products are not certified medical devices and the accompanying data generated by them should only be used as a guide. Only medically acceptable devices (like a Sphygmomanometer for Blood Pressure) should be used for exact readings. Always consult with a medical professional for accurate testing and results.